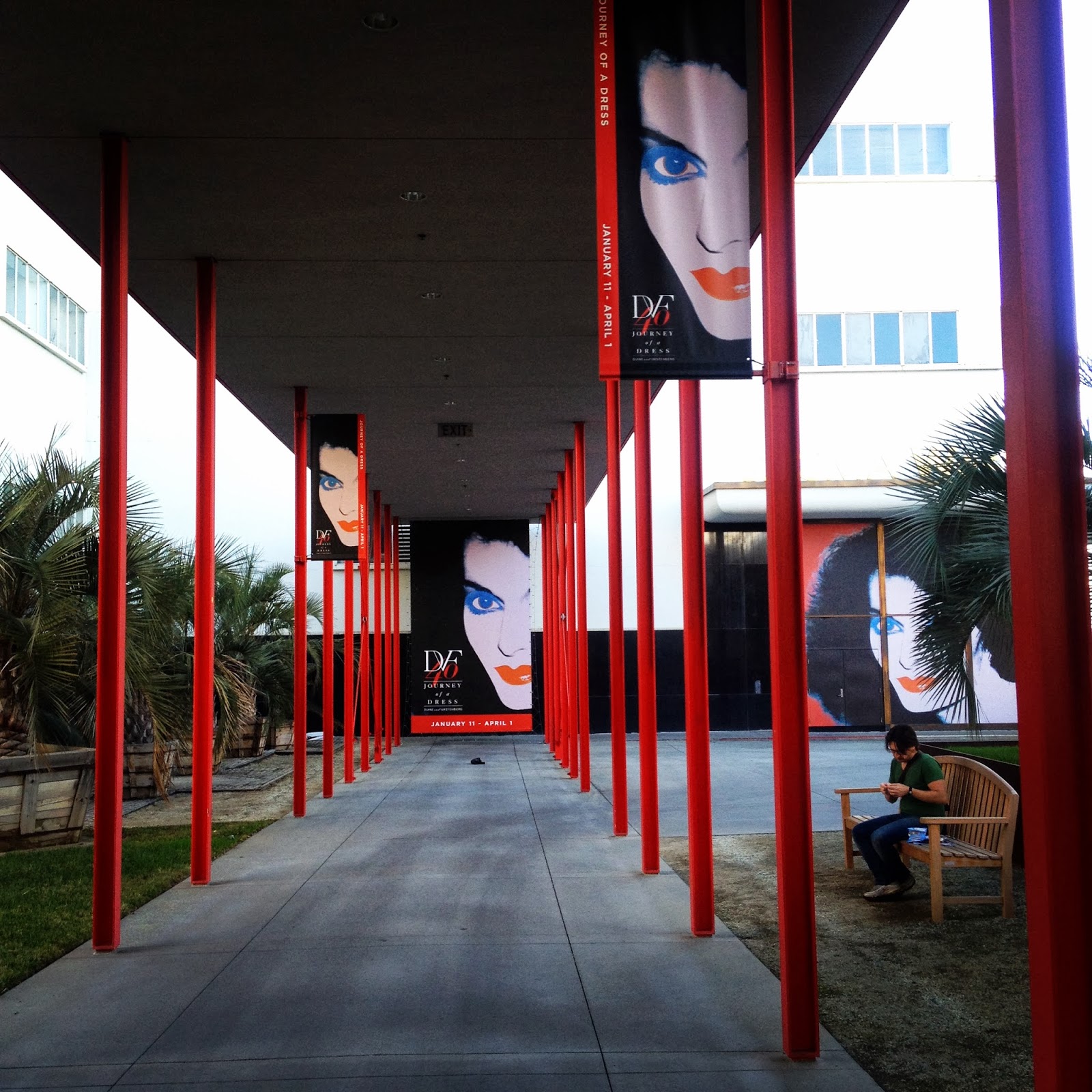 I want to see Diane Von Furstenberg’s JOURNEY OF A DRESS  exhibition at LACMA, because it takes me right
back to Cincinnati, Ohio, 1975 when I was working in Shillito’s advertising department as a copywriter, having taken off the fringed suede jacket, the newsboy cap and the bell bottoms, and put on DVF's green and white wrap dress to go to work. So I climb in the mini cooper and motor over.

I love the walk on the promenade past the Broad Contemporary and the Resnick Pavillion to the old May Company that has been turned into the Furstenberg pop up. It’s a blazing path through red columns and palm trees and soothing places to sit and relax with close ups of Ms. Von Furstenberg’s face. Red lips. Blue eyes.  Oh yes. 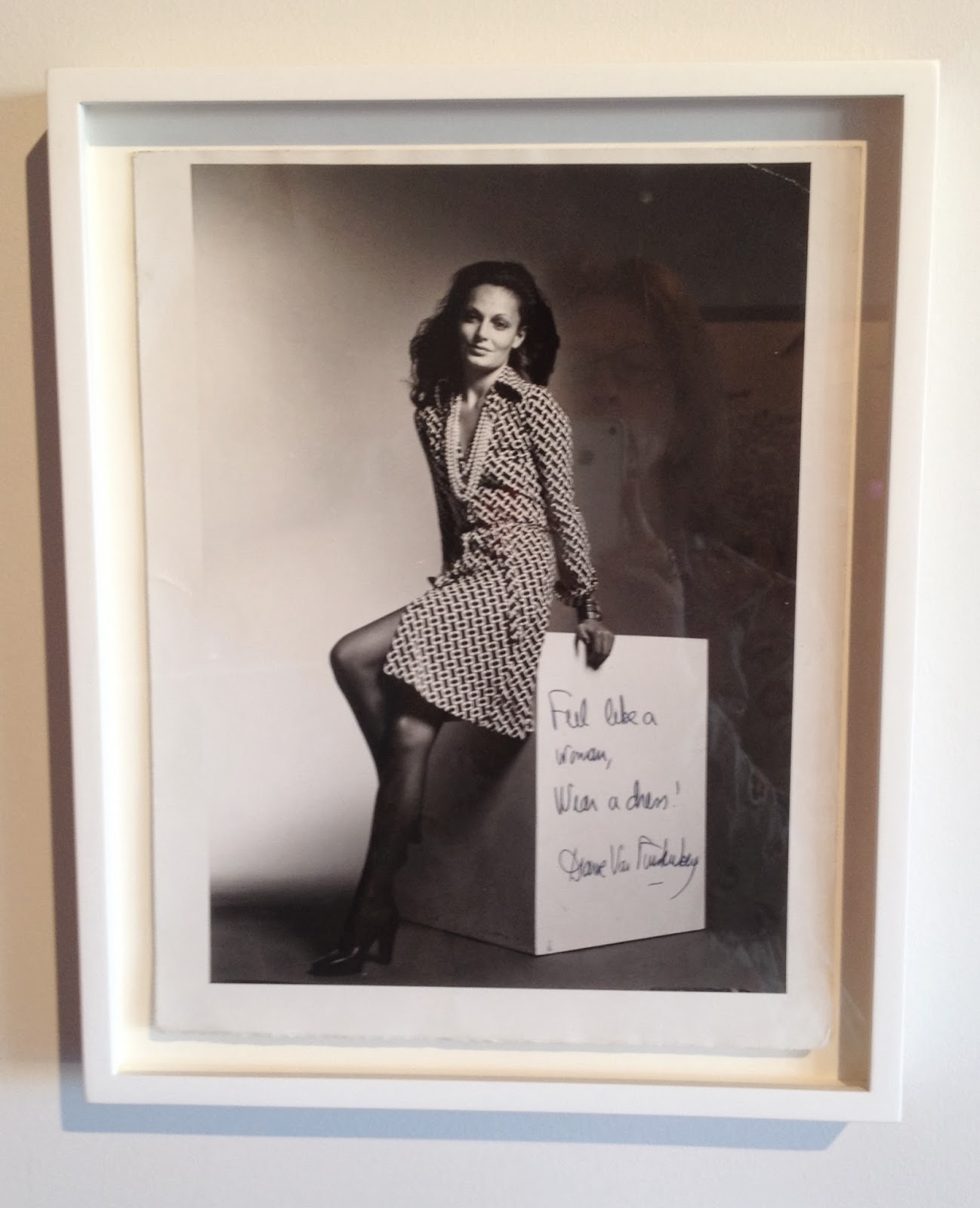 Inside, the first thing I see is Diane’s portrait wearing THE dress with the caption:

then floor to ceiling photographs of Diane wearing the dress, showing the dress to buyers, a letter from Diana Vreeland about the dress when she was the editor at Vogue, and a sculpture of THE wrap dress bang in the middle of the aisle. 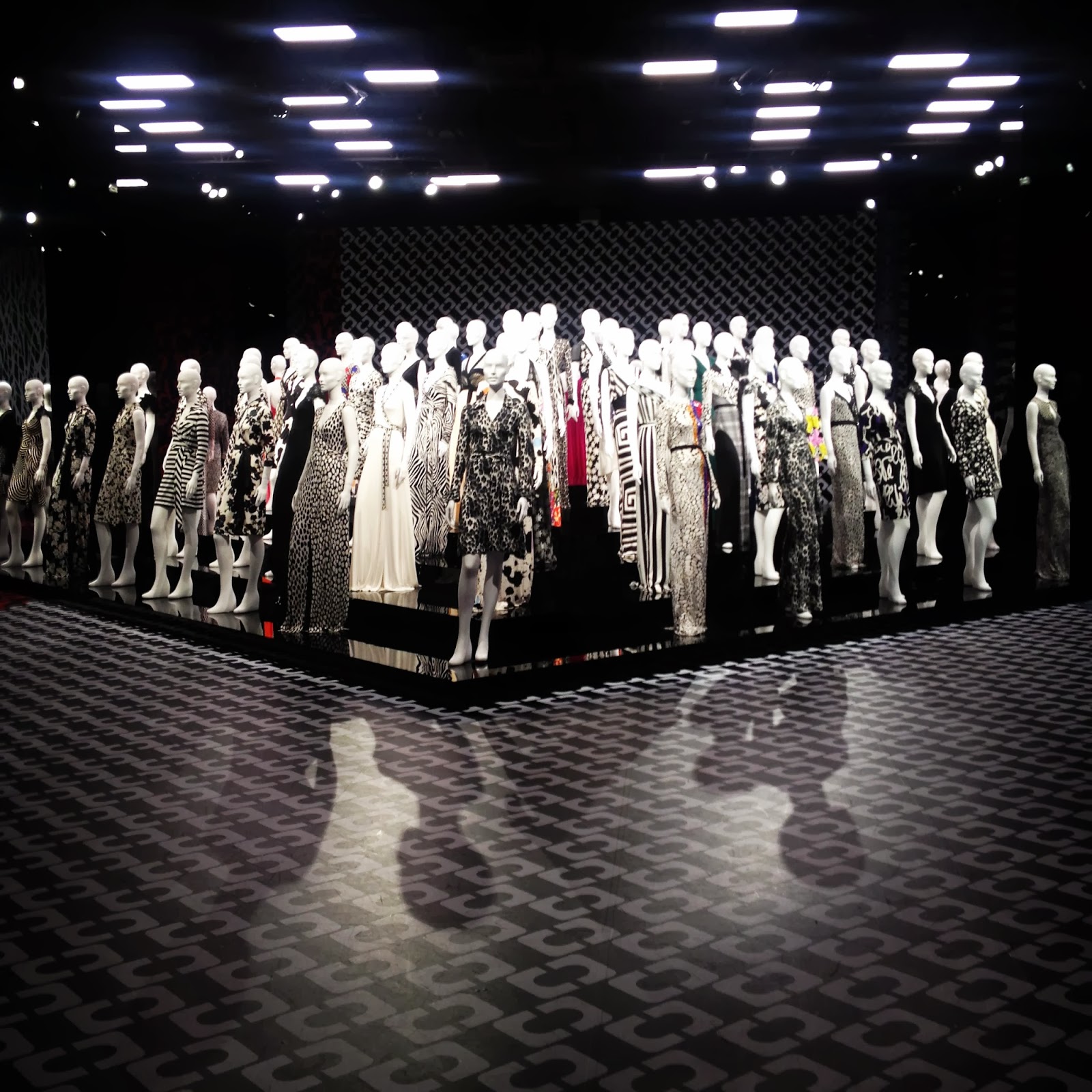 The exhibition is so well presented in not only the dresses, but the walls and floors all geometric patterns and chain linked and leopard papered in a room of 4 or 5 massive bays with 198 mannequins all in The Wrap dress; short, long, printed, solid, stenciled with her face, in florals, in bold stripes, in mod prints of celadon blue, black and white, in diamond patterns of turquoise and black, in muted yellow, gray and white mini pattern next to a black dress with yellow and white daisies. I am in heaven.  I am so excited I hardly have time to take in another room of Chuck Close and Avedon photos of Diane and all her Studio 54 co-horts. 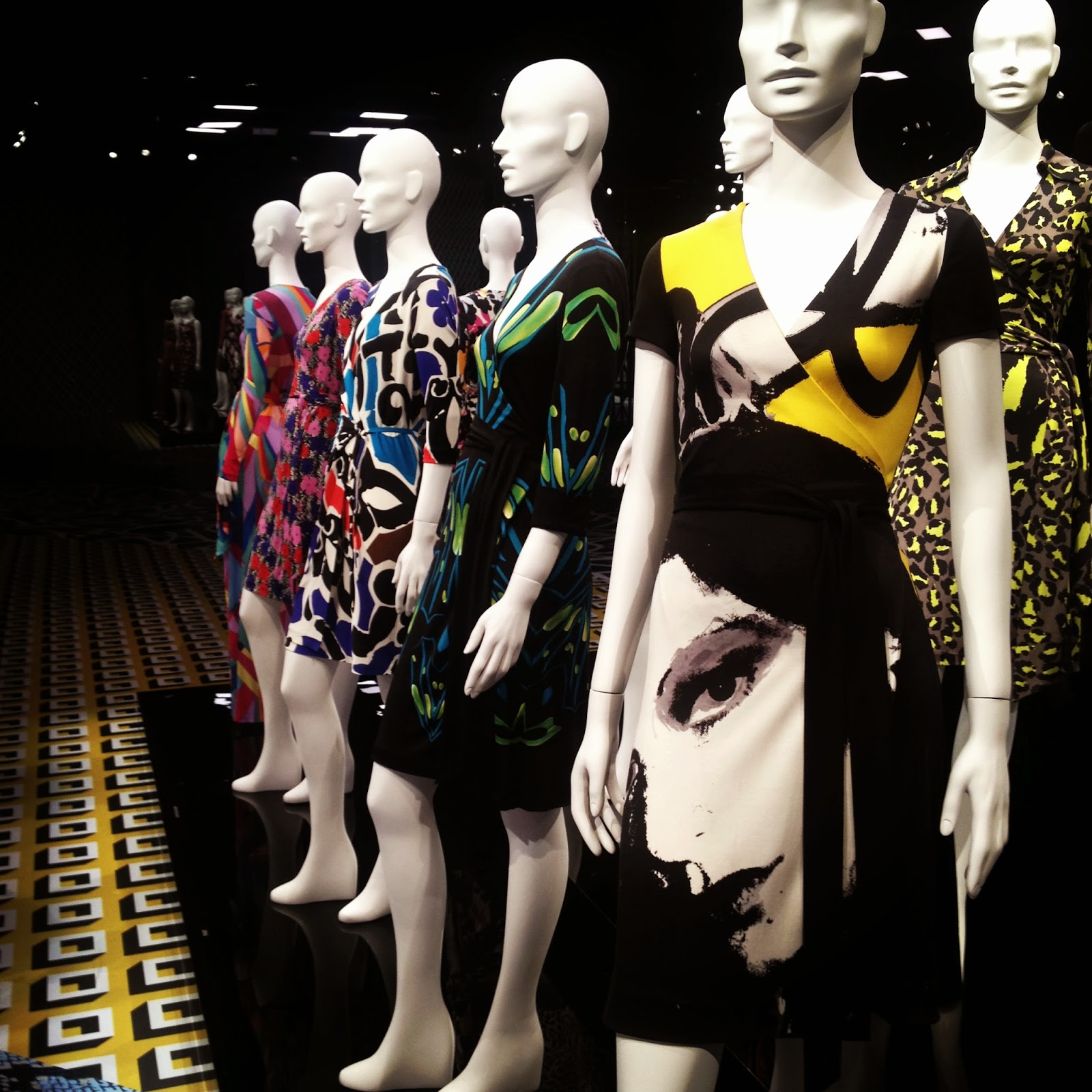 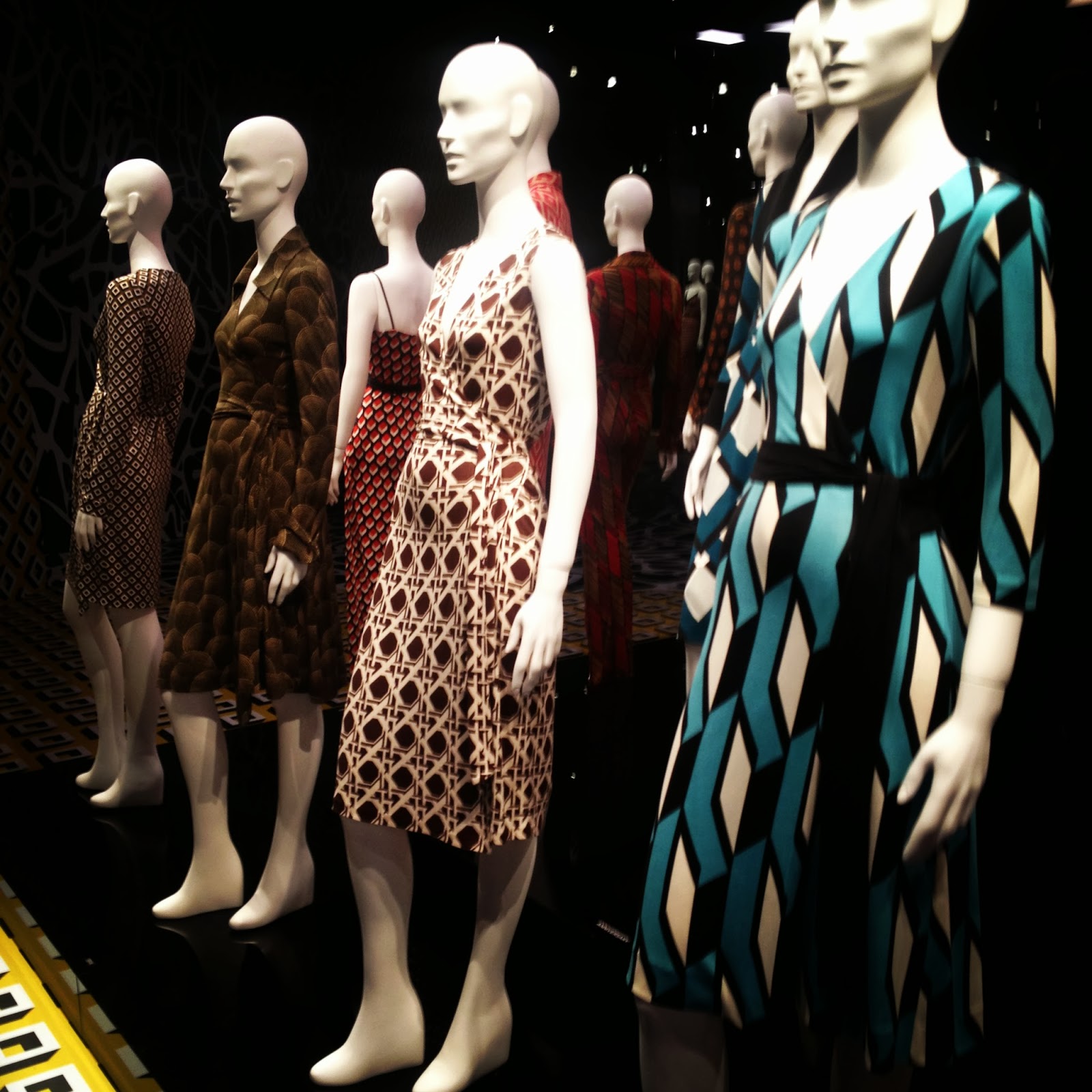 The cell rings and I get an invitation to dinner.

The down side: No dresses in the gift shop. What?

I’ve got to go get a dress.

MARINO RISTORANTE since 1983 - Mario Marino's "Day after Day and Night after Night" Adventures in Eating Part 1. 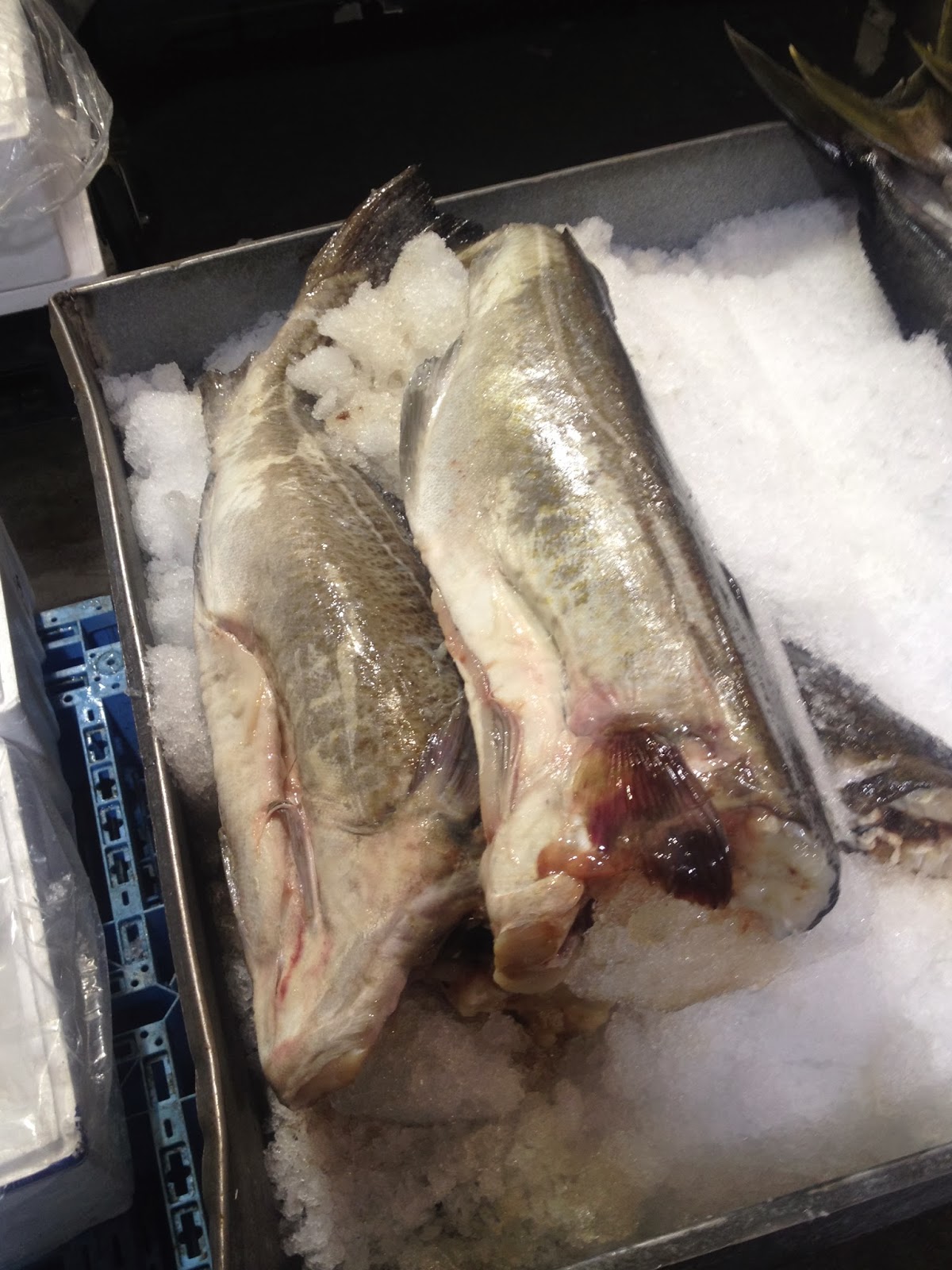 I jogged past the restaurant and waved at Mario.

And he got so excited telling me about it's sustainability and excellent taste and the cold water of the Barents Sea and his daily trips downtown to the fish market that two days later I was up at 6 a.m. going with him to see the fun he's having choosing fish for lunch and dinner at Marino.

"Everyone likes to eat." I say to him.

"Liking to eat and knowing about food are two different things." he shot back. The morning ride along proved he knows what he's talking about. 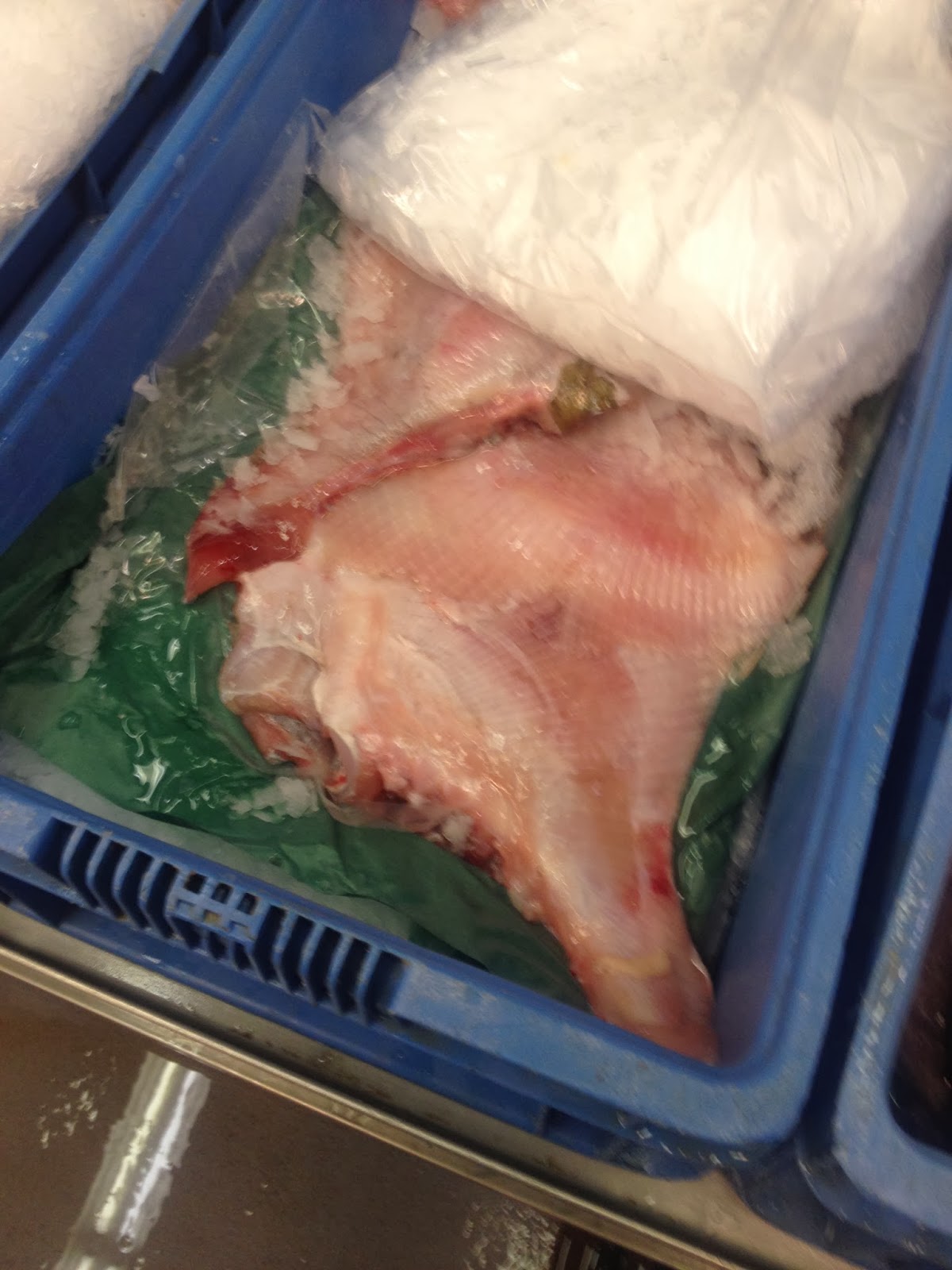 MARTONI'S followed in 1960 on Cahuenga in Hollywood, and in 1983, together with his wife Maria, Ciro opened MARINO on Melrose.

Along with his brother Salvatore (whose restaurant
IL GRANO, opened in 1997  http://www.ilgrano.com ) and sister Rosanna, Mario has been educated and trained in choosing food and wine his entire life.

And it's clear he loves what he does because he is always smiling. 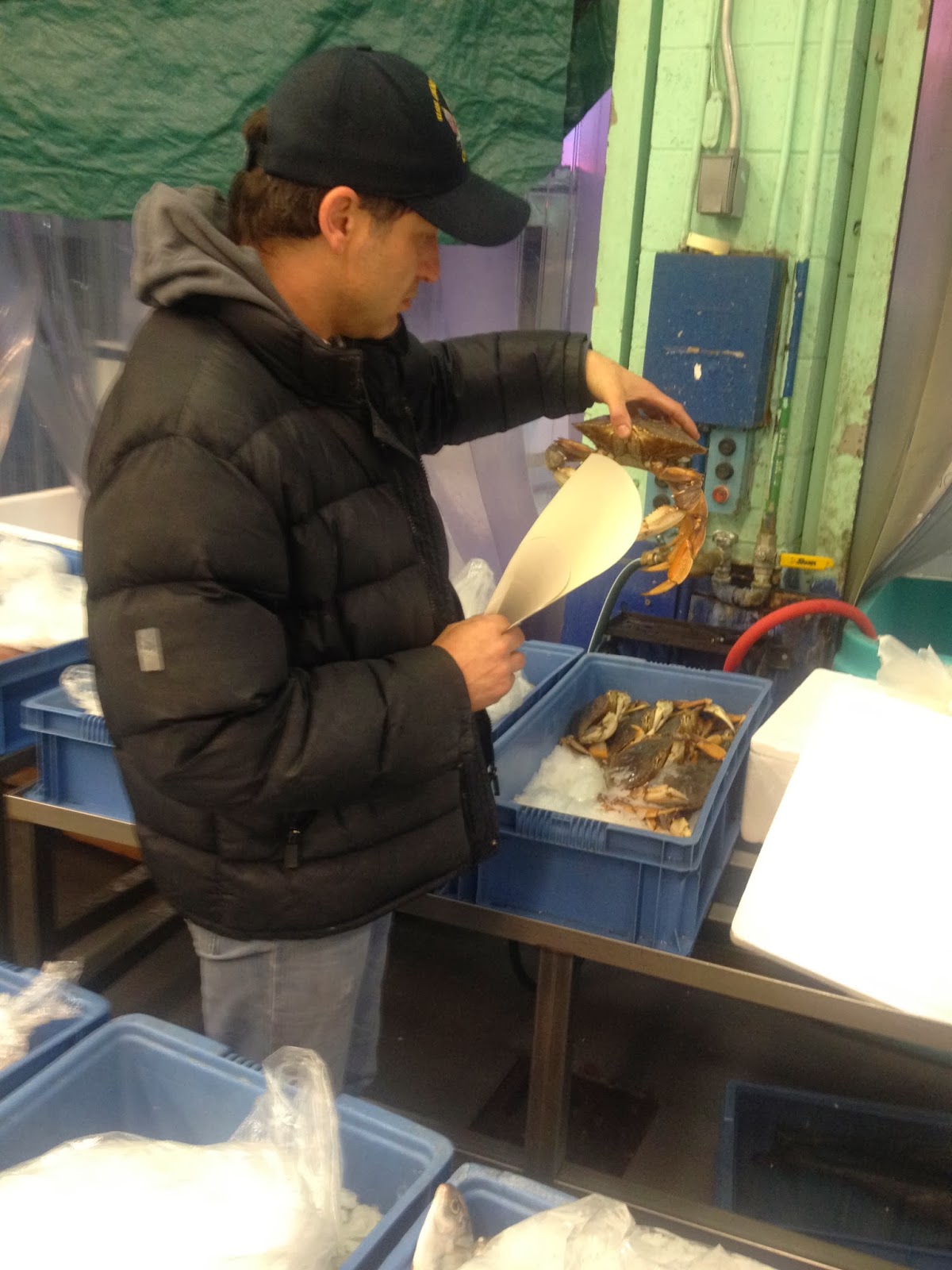 Once in the market Mario chooses from tanks of lobsters, just arrived Santa Barbara prawns, swordfish, skate, that star the Norweigan cod, and branzino and tuna and crab and monkfish.

"We can't predict what the weather will do to the prices, but I'll always choose live, fresh, organic ingredients. I'll never serve anybody anything I wouldn't eat myself." 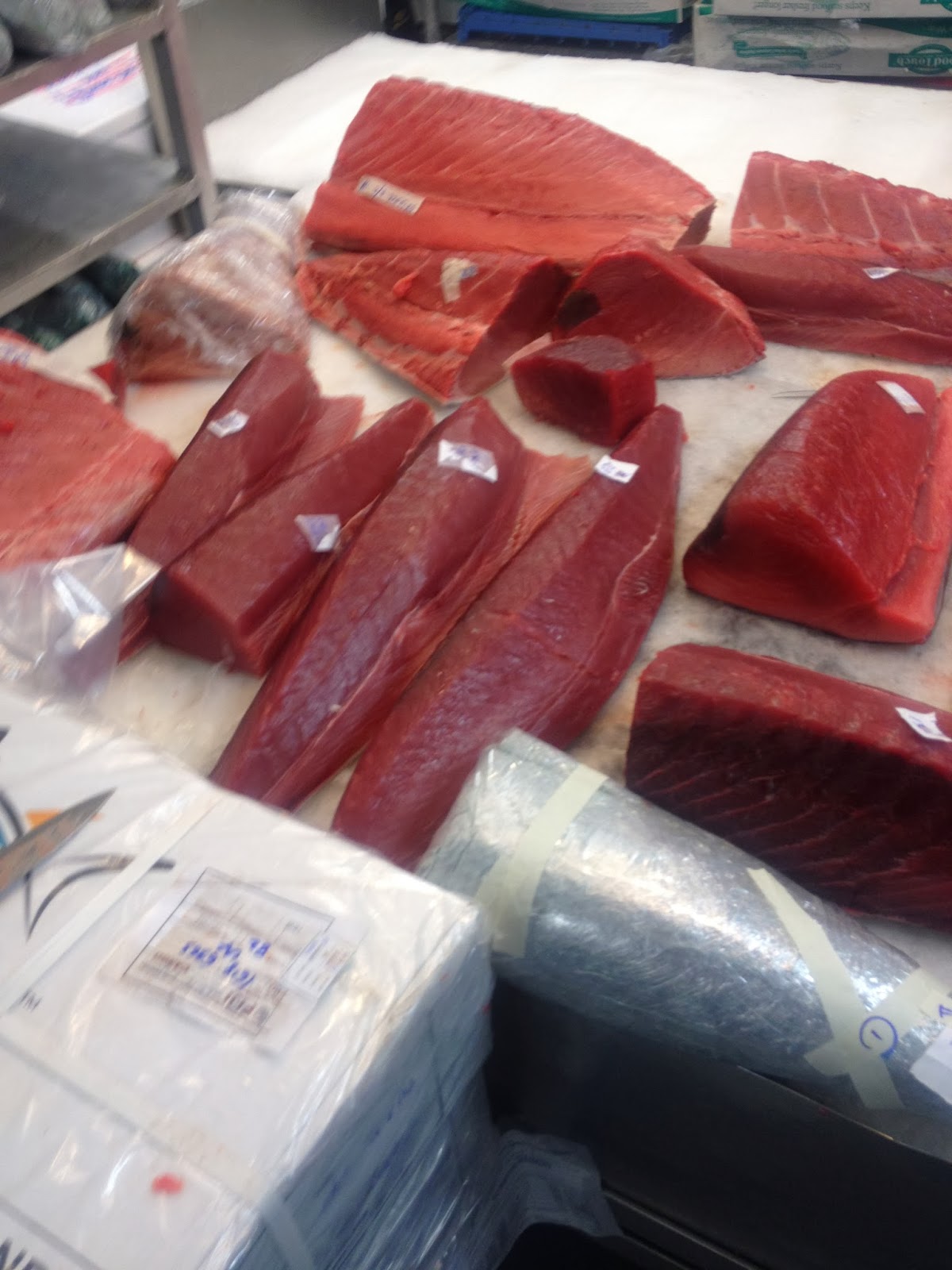 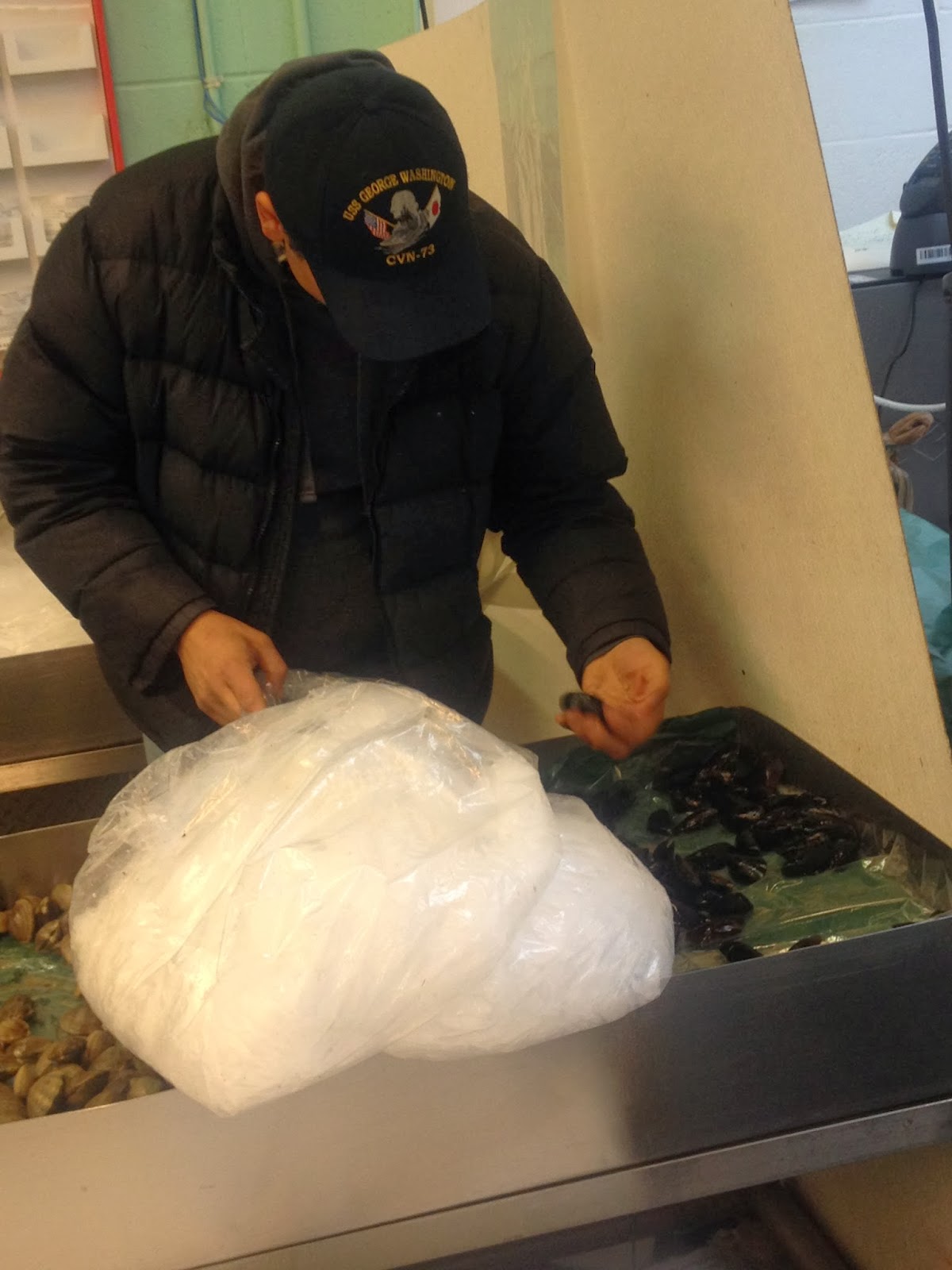 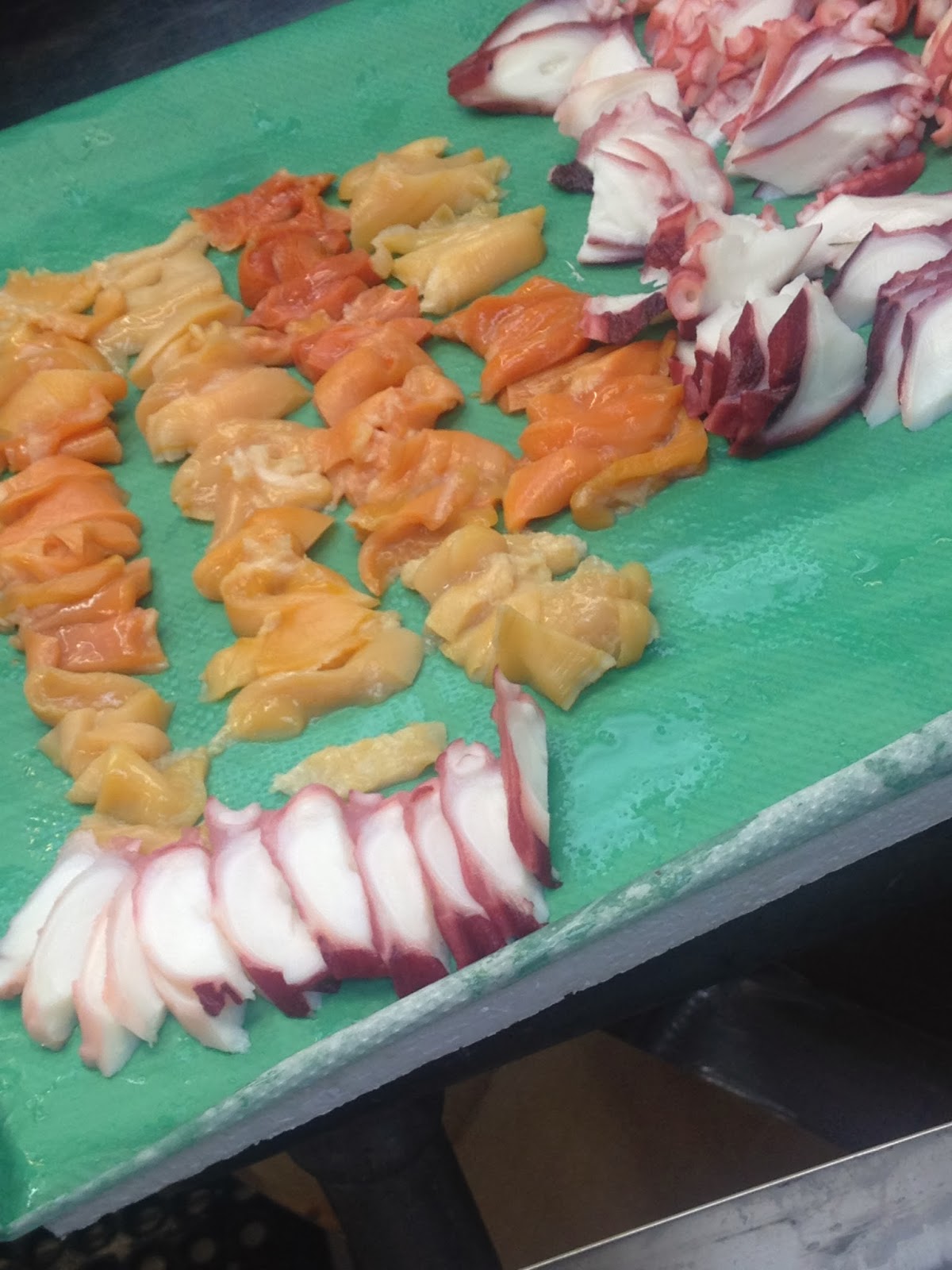 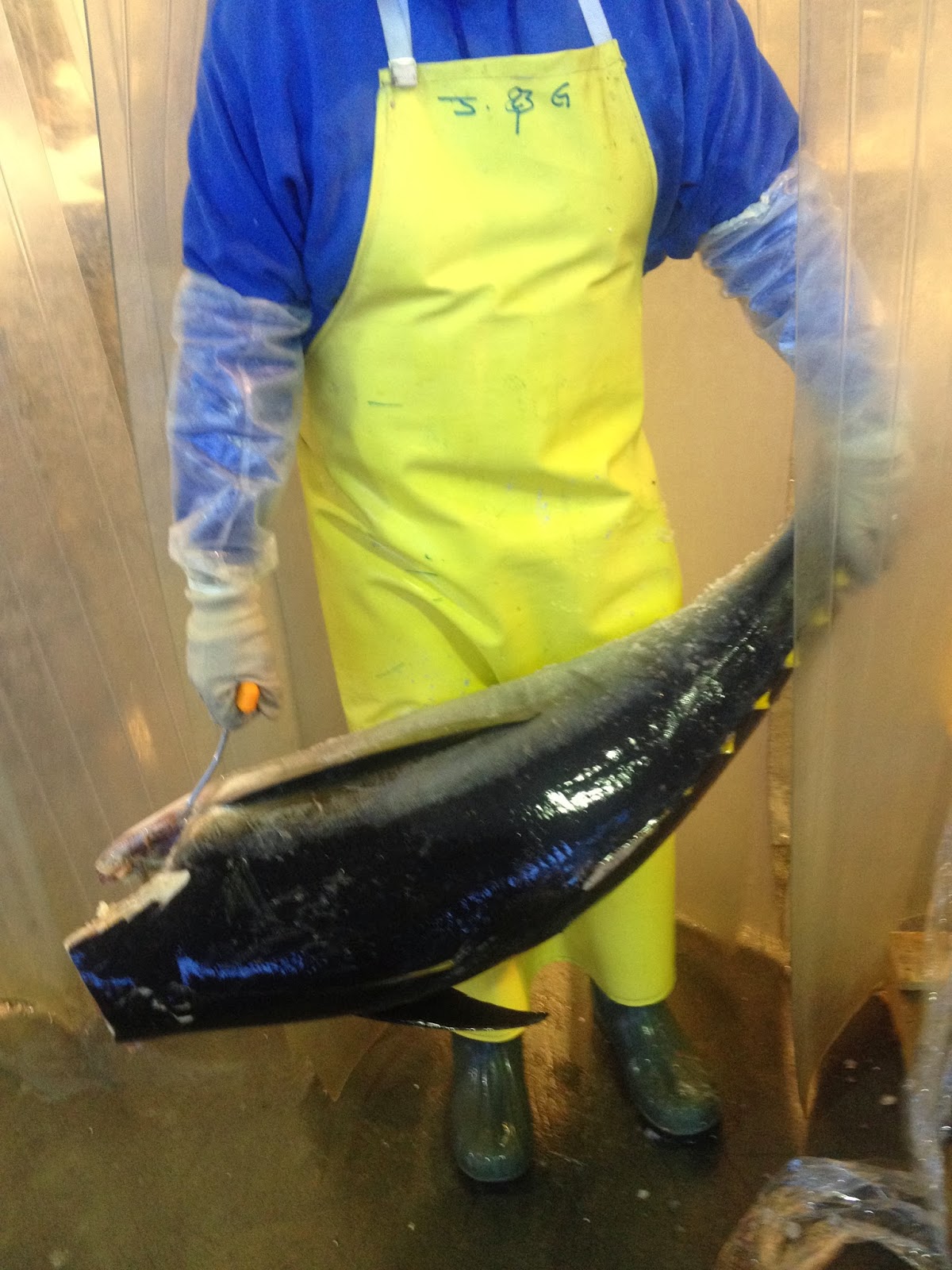 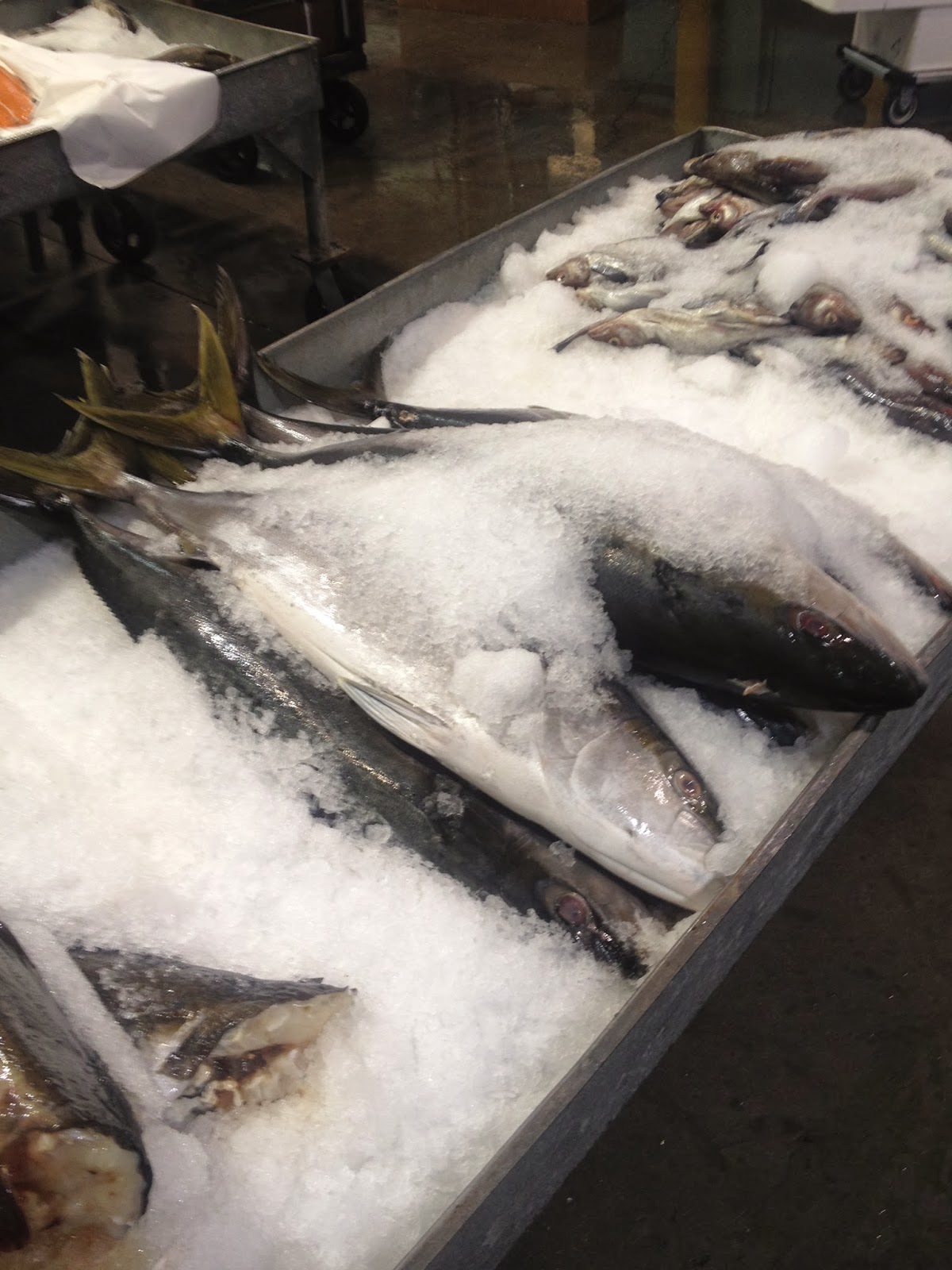 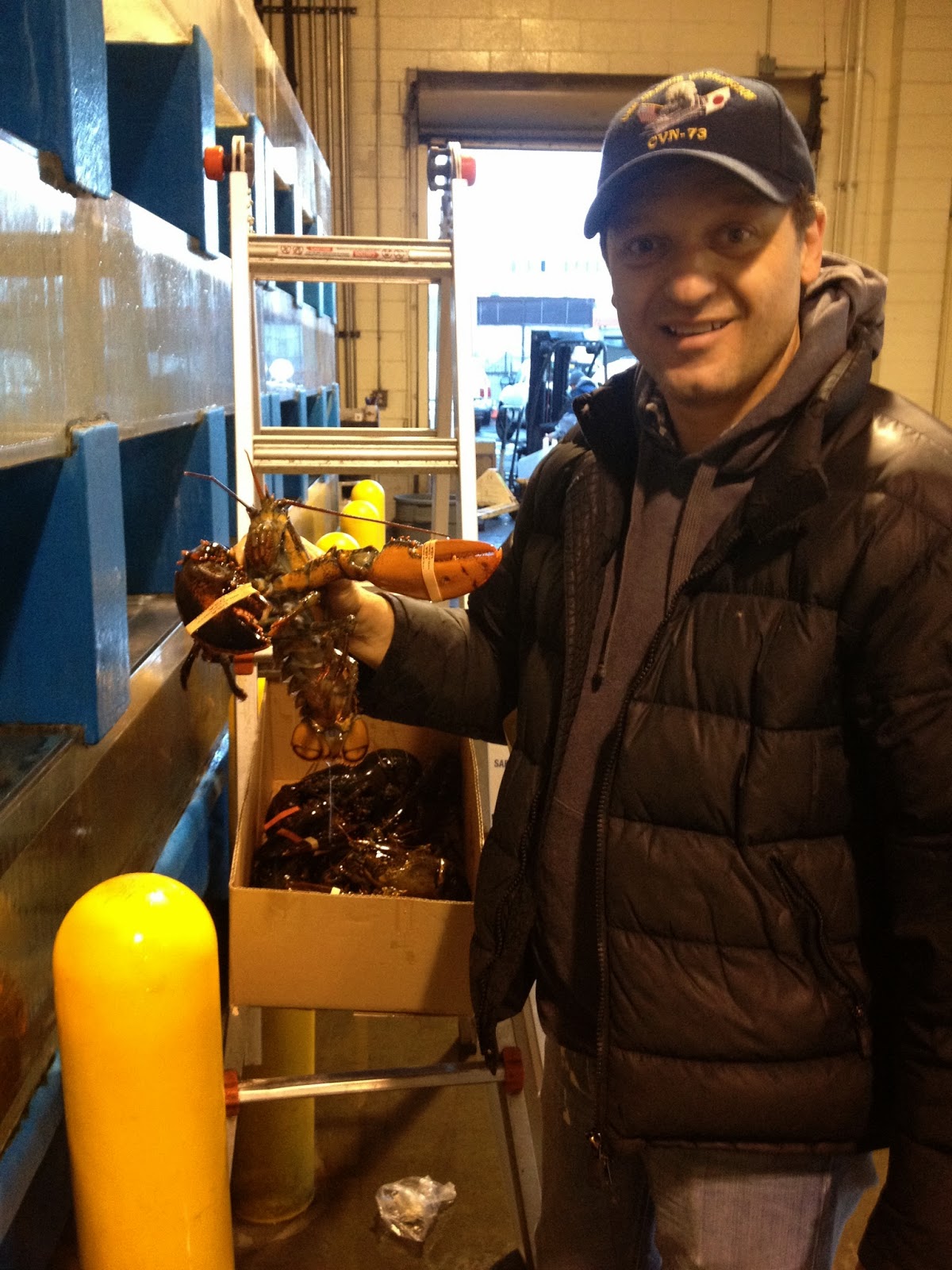 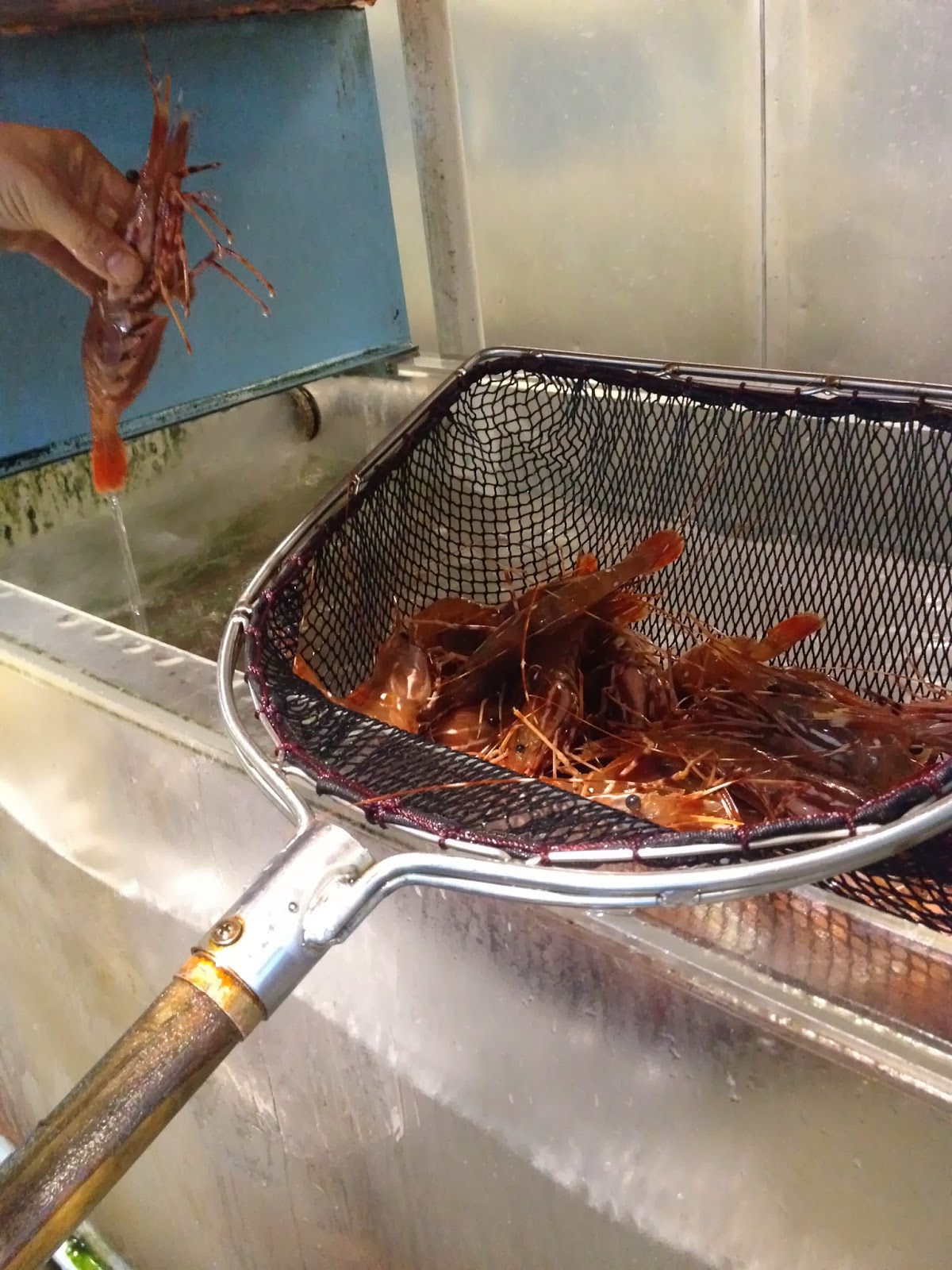 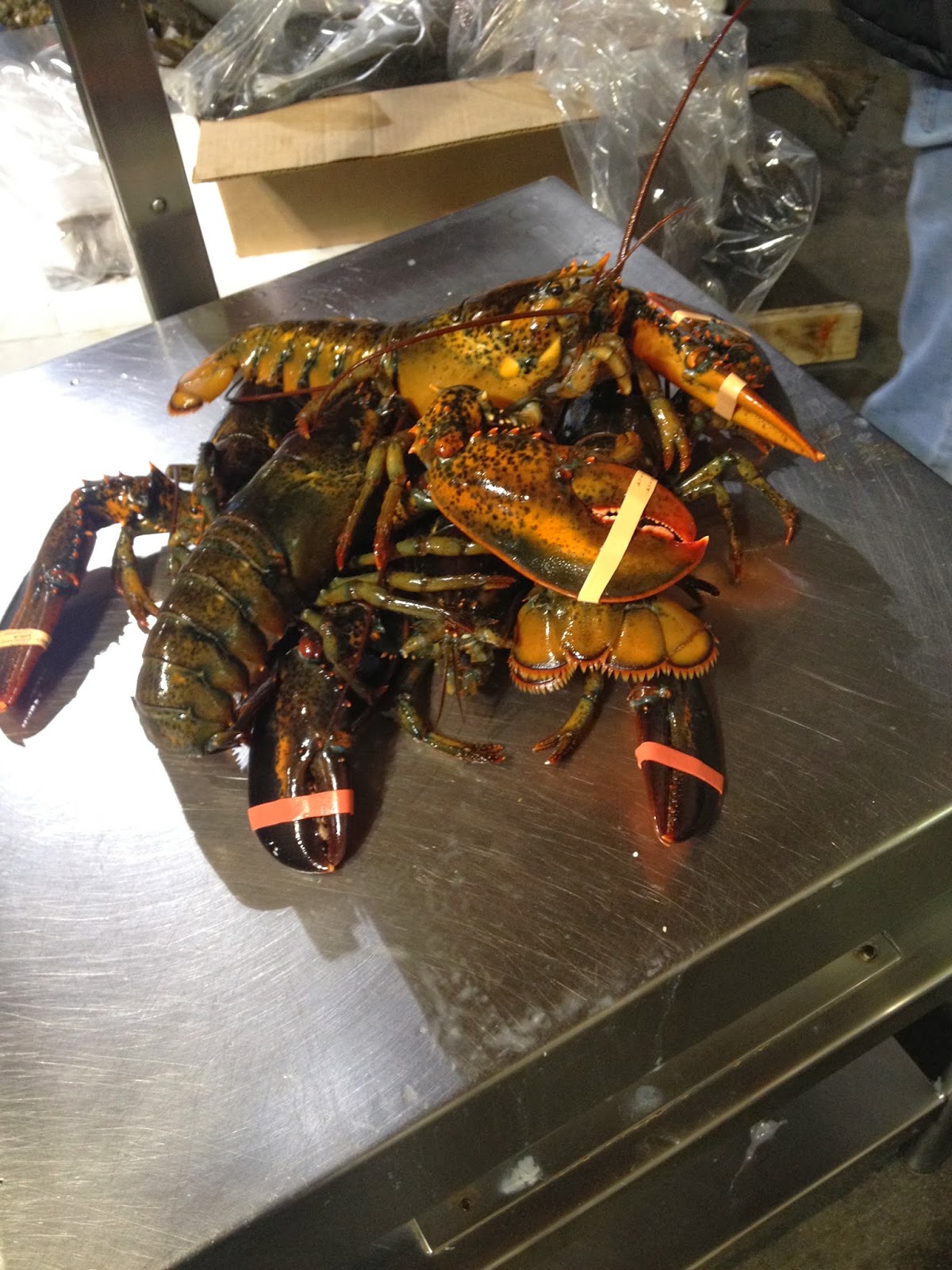 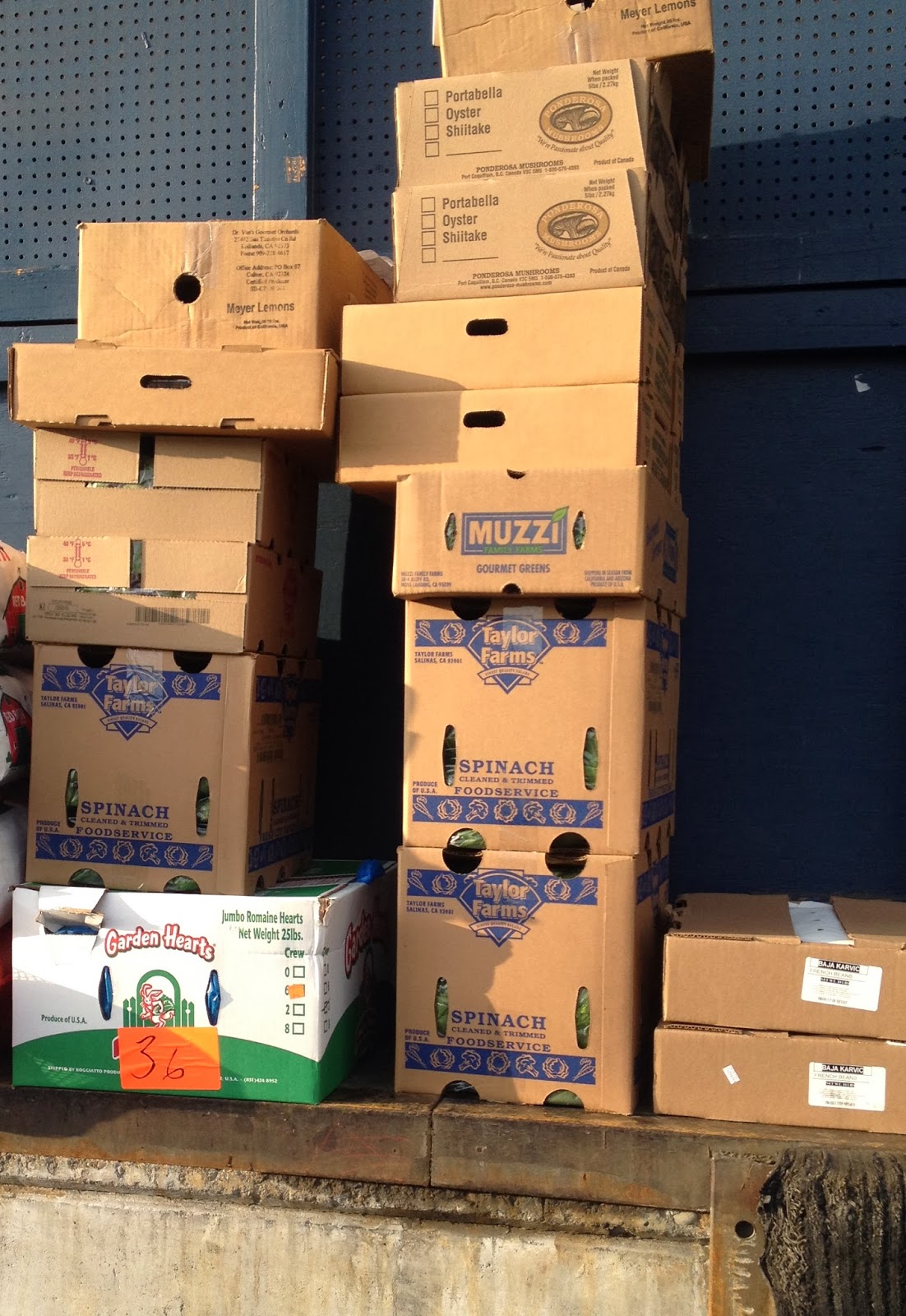 "I only make so much food a day…all organic, line caught, farm raised. I want MARINO to flourish." 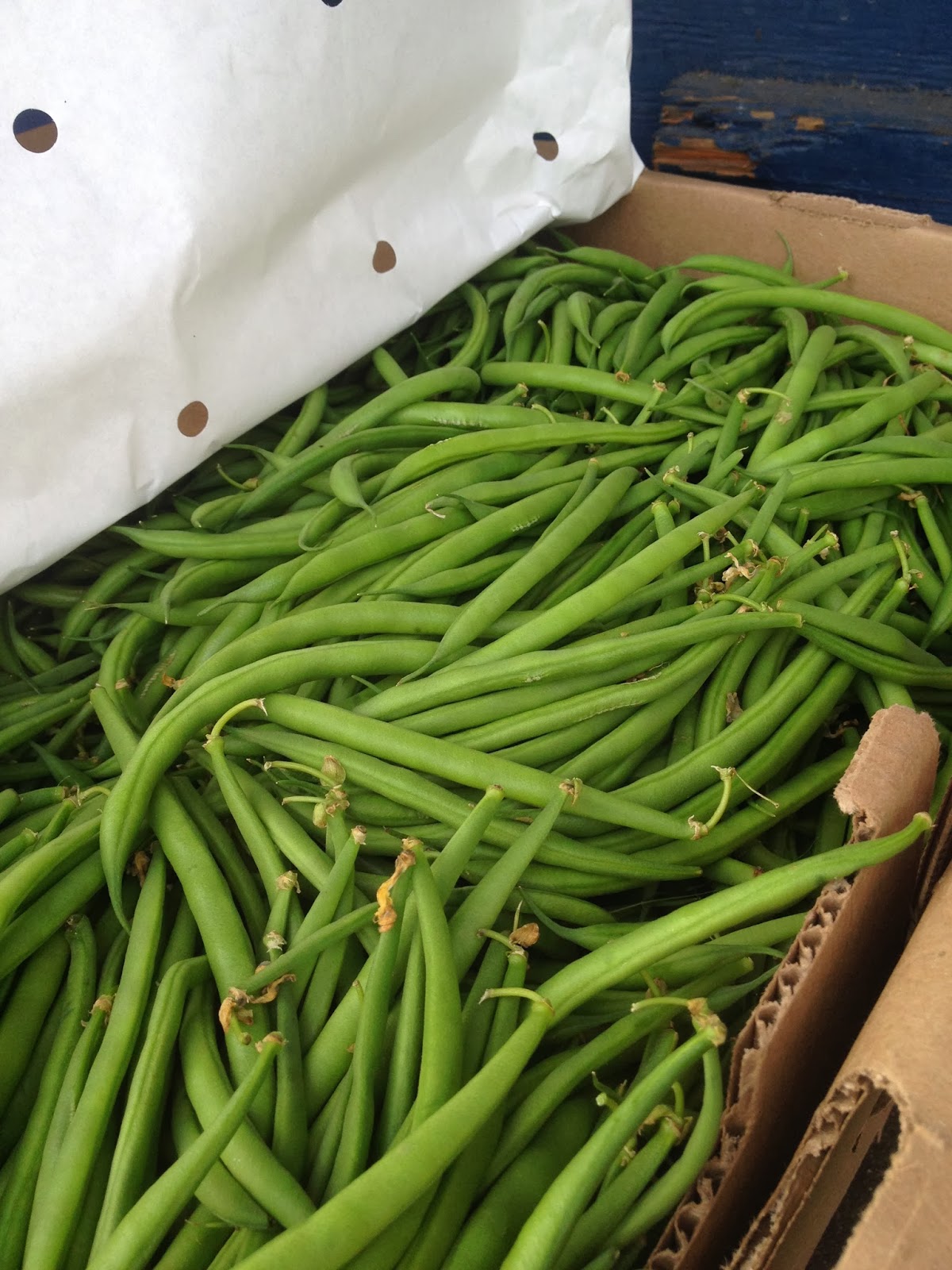 Stay tuned for part 2 and see how Mario's love of fresh food translates into the beauty that appears on the plate.

http://www.marinorestaurant.net/htmldocs/contactus.html
Posted by kathleen matson at 4:27 PM No comments: